There are many stories below that is in relation to Shiva and Parvati Maa.

This story tells us why Shiva is also known as Neel Kanth and how assisted the gods against the demons.

Lord Shiva has been associated with a lot of names, and all these names have mostly appeared with a specific deed or story as per the Indian mythology. Neelkanth is one of them and the name emerged from a story affiliated with the story of “Samudra Manthan” where Shiva drank the poison to prevent calamity and destruction of the Universe, as is mentioned in the Bhagavata Purana, Mahabharata, and Vishnu Purana.
The story goes back to the time when there was a big war between the Devas and the Asuras. Unfortunately, the Devas were deprived of all their strength, energy and fortune as Sage Durvasa had cursed the Devas following an incident with Indra, the king of Svarga. Now, with such loss, the Devas eventually ended up losing the battle with Asuras, led by Bali, who had now gained control over the whole of the Universe.
The Devas, in distress, went to seek the help of Lord Vishnu who suggested they be more tactful and prudent while dealing with this given situation. Lord Vishnu asked the Devas to form a pact with the Asuras so that both sides can assist in churning the ocean to gain the nectar of immortality. Though, Lord Vishnu had planned that he will only make this nectar available to the Devas and not the Asuras. Therefore, using Mount Mandara as a churning rod and, Vasuki, the naga-raja (who holds on to Shiva’s neck) as the churning rope, both the Asuras and Devas started churning the ocean for pulling out the nectar of immortality. It so happened that while pulling out the nectar of immortality, the process of churning the ocean also released a poison of sorts called “Halahala” that could wipe out the whole of creation. This, in turn, made everyone almost choke to death with suffocation because of the powerful poison that was released. Agitated with the scenario, the Devas went to Lord Shiva for help as he was the only savior who could do the undoable and save everybody from this wrath. Bholenath, being concerned with this peculiar situation, consumed the poison himself to save humanity from calamity and destruction.
While consuming the Halahala, Shiva’s throat turned blue because of the pain and intensity of the poison. He did not let it go down which is why he let the poison stay in his throat so that it does not reach the stomach and kill him. There are other versions of this story as well where Shiva while trying to drink the poison, moaned in pain which Parvati could not witness. That is why she grabbed the throat of Lord Shiva so that the poison does not trickle down and hurt him. This poison was blocked in the throat of Shiva, which turned it blue, which is why the name “Neelkanth” was given to Lord Shiva. 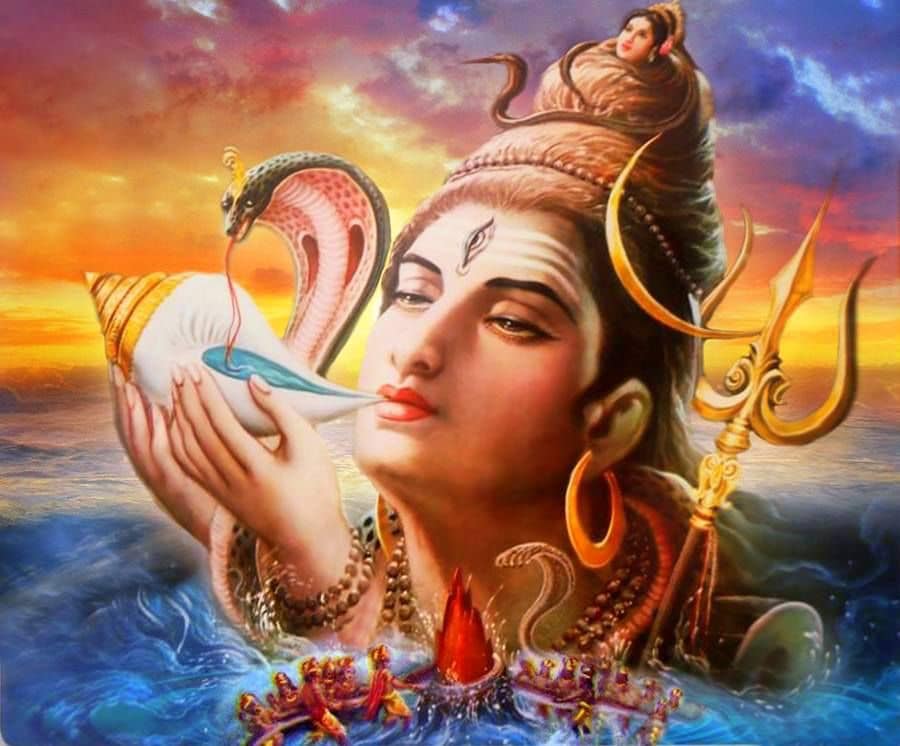