The holy Hanuman Jayanti festival celebrates the birth of Hanuman as per Hindu calendar, one of the prominent heroes of the Indian super epic Ramayana. Hanuman Jayanti is observed in the Chaitra lunar month where a number of spiritual discourses are held in a majority of Hindu temples. This festival is celebrated with immense devotion by Hindus of all hues and in particular by the devotees of Hanuman or Hanuman Bhakts. The different aspects of Hanuman are remembered and worshipped on Hanuman Jayanti festival day. An ancient saying from Indian tradition says that if you want Lord Ram to terminate all your sorrows, you can reach Him only through Lord Hanuman and Hanuman Jayanti is a perfect day for this. Well, God Hanuman is immensely powerful and an absolute devotee of Lord Rama. He is the granter of happiness and destroyer of problems. It is further believed that continuous reciting of the famous Hanuman Chalisa can help one overcome all sorrows and acquire supernatural powers. As Hanuman is very powerful, so his worship has become very powerful. 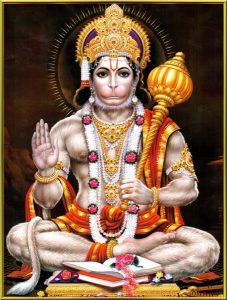 In one legend, he crossed mountains, scaled higher towards the skies to eat the sun, thinking it to be a mango. A malefic planet, Rahu which was on its way to form an eclipse with the sun, came in his way and stopped him midway. Hanuman defeated Rahu who later approached Indra, the king of devas, for assistance. To this, Indra responded and threw Vajra (thunderbolt) that hit the young child and made him unconscious.
After finding his son lying in an unconscious state on the earth, an angry Vayu made life difficult on the planet to survive. Later, devas realized they made a huge mistake and revived the young Hanuman who was blessed with a number of boons. 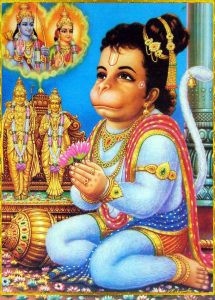