Once, Lakshmi Maa insisted Lord Vishnu to accompany Him during one of His visits to the earth. Lord Vishnu agreed but on the condition that She would not fall for earthly temptations and would not look in the south direction. Goddess Lakshmi agreed to this condition of Lord Vishnu.

When Lord Vishnu saw that Goddess Lakshmi has broken her pledge, He got annoyed and asked Her to spend the next twelve years on the earth as a penance, serving at the field of the poor farmer who has cultivated mustard and sugarcane in the field.

With the arrival of Goddess Lakshmi, the poor farmer became prosperous and wealthy overnight. Gradually, twelve years passed and the time for Goddess Lakshmi to return back to Vaikuntha had come. When Lord Vishnu came to the earth in disguise of an ordinary man to take Goddess Lakshmi back, the farmer refused to relieve Goddess Lakshmi from his services.

When all attempts to by Lord Vishnu failed and the farmer didn’t agree to relieve Goddess Lakshmi from his services, Goddess Lakshmi revealed her true identity to the farmer and told him that She could not stay any longer on the earth and need to go back to Vaikuntha. However, Goddess Lakshmi promised the farmer that She would visit him every year during the night of Krishna Trayodashi before Diwali. King Bali became the most powerful king on earth. But he became highly arrogant. His form of charity was an occasion for pomp and show and those who went to seek Alms from the king Bali suffered insults and humiliation. His arrogance and misrule ended when the Lord appeared as beggar (vaman avtaar). King Bali asked the dwarf beggar to get anything in his kingdom. Lord replied he just want a piece of land that could be covered in his 3 steps. And with his first step Lord Vishnu covered the entire heaven, with the second step the earth and asked Bali where to keep his third step. Bali offered his head and became spiritually enlightened. The Narak chaturdashi day therefore is dedicated to lights and prayers and the elimination of greed. Once upon a time there was a great warrior, Prince Rama, who had a beautiful wife named Sita.

There was also a terrible demon king, Ravana. He had twenty arms and ten heads, and was feared throughout the land. He wanted to make Sita his wife, and one day he kidnapped her and took her away in his chariot. Clever Sita left a trail of her jewellery for Rama to follow.

Rama followed the trail of glittering jewellery until he met the monkey king, Hanuman, who became his friend and agreed to help find Sita. Messages were sent to all the monkeys in the world, and through them to all the bears, who set out to find Sita.

After a very long search, Hanuman found Sita imprisoned on an island. Rama’s army of monkeys and bears couldn’t reach the island, so they began to build a bridge. Soon all the animals of the world, large and small, came to help. When the bridge was built, they rushed across it and fought a mighty battle.

When Rama killed the evil Ravana with a magic arrow, the whole world rejoiced. Rama and Sita began their long journey back to their land, and everybody lit oil lamps to guide them on their way and welcome them back. 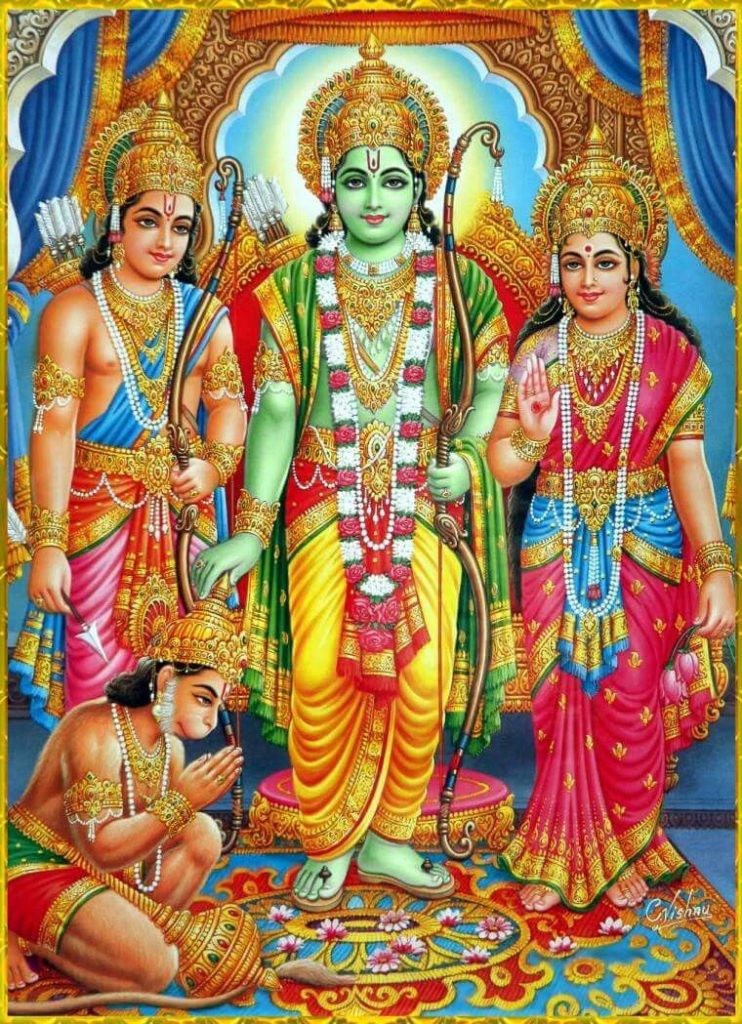